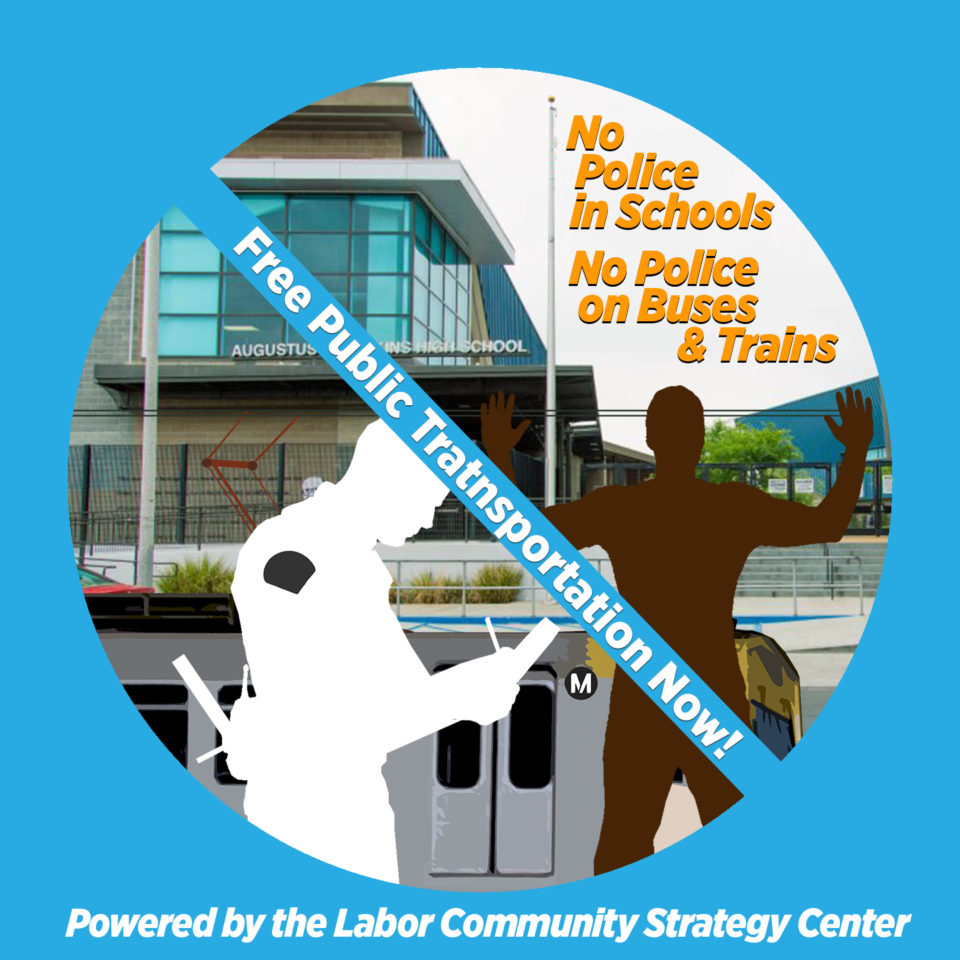 No MTA Attacks on Black Passengers

Free Public Transportation is so obvious it’s revolutionary.  The MTA is one of the richest public agencies in the world with a $5 billion a year budget about to become $7 billion through its latest sales tax—now 4 that all of us pay. So first, “Free” public transportation is not actually free but already paid for over and over and over by the tax payers. Second, L.A. is a city of great poverty in a nation of great spiritual and economic poverty.  The MTA’s 500,000 daily passengers—20% Black, 55% Latino, 60% women and more than 60% extreme low-income cannot afford the $100 a month bus pass nor the $24 a month student pass. For many families making no more than $20,000 their monthly bus costs are more than $200 a month. MTA ridership is Down! Because of poor service, high fares, police brutality and long waits. If we had free public transportation MTA daily ridership might reach 1 million people riding a day and with dramatic reduction in auto use.  Also it would obviously end police brutality and harassment in the fare collection process because “no fare” leads to “no fare collection.”

No Police On MTA Trains and Buses No Police in Schools

This campaign focuses on police occupation and brutality on MTA trains and buses but it is part of an even broader problem of systematic police domination of our society. In Los Angeles more than 50% of the city budget, more than $2 billion, is for police. The MTA just passed a massive police expansion plan for $797 million over 5 years to create a police state on its buses and trains—a literal army of fare collectors, Los Angeles Police Department, Los Angeles Sheriff’s Department, and Long Beach Police Department. They created a phony “crime problem” on the trains when the main crimes are MTA police attacks on Black and all rail and bus riders. We can’t have a viable public transportation system that is little more than a police state on wheels and tracks. We must cut the MTA police budget by 50% now.

The Strategy Center is working with Public Counsel, Equal Justice Society, attorney Lisa Holder and others to bring a civil rights suit against the MTA for systematic and egregious racial profiling of Black Passengers. This is reflected in Black passengers who are 20% of all MTA passengers receiving more than 55% of all tickets and 60% of all arrests on MTA trains and buses. The vast majority of these tickets and arrests are for quality of life, broken windows, racial profiling, punitive social mores that the MTA imposes on its passengers because so many of them are Black, Latino, and very low-income.

We are asking the MTA to cease and desist in the enforcement of all fare checks on the train and cease and desist all tickets and arrests for violating their arbitrary “codes of conduct” that allow them to both ticket passengers, bring them to transit court, and of course arrest them on any pretense

We are calling on the federal courts to order the MTA to stop its massive police presence on the trains, to use conductors not enforcement police armed or unarmed, and at most, to ask passengers who do not pay their fare or who do not carry out MTA rules to exit at the next stop. It is a tragedy that today Black and Latino public transit riders, like every other aspect of society, are treated like suspects and criminals not valued members of society or passengers and have to suffer arbitrary and cruel police treatment on the way to work or even looking for work.

There is no question that many MTA riders are not paying their full fare or any fare—as explained above, because there is no way they can afford it. But to make “fare evasion” a crime is little more than the debtors prisons of the past, it cannot be a crime to not be able to pay for a public good that is already supported by massive amounts of taxpayer dollars and especially rules that are enforced in such a grotesque and discriminatory manner.

No Cars in LA

The Climate crisis makes the end of the auto system in L.A. and the U.S. imperative. The world is moving towards a 2 degree Celsius Future and worse, in Sub-Saharan Africa the temperature may move towards 3 degrees—with massive heat waves, droughts, floods, and mass famine facing 775 million people.  There are 6.2 million cars and 1 million trucks in L.A. The auto cannot be our future—free public transportation with zero-emission electric buses running 24/7 is our future—let’s fight for it.

Become a Fight for the Soul of the Cities Member today. Dues are $10-$50 dollars per year. Members of the Fight for the Soul of the Cities are placed on our mailing list, and given a curtesy call at least once a month to hear updates on the campaign, and upcoming events and actions. You’ll also receive the Voices from the Frontlines weekly newsletter. Please Choose the membership amount that best suites you. and fill in all of your contact information. Those who fill in an address will receive a full welcome packet in the mail.