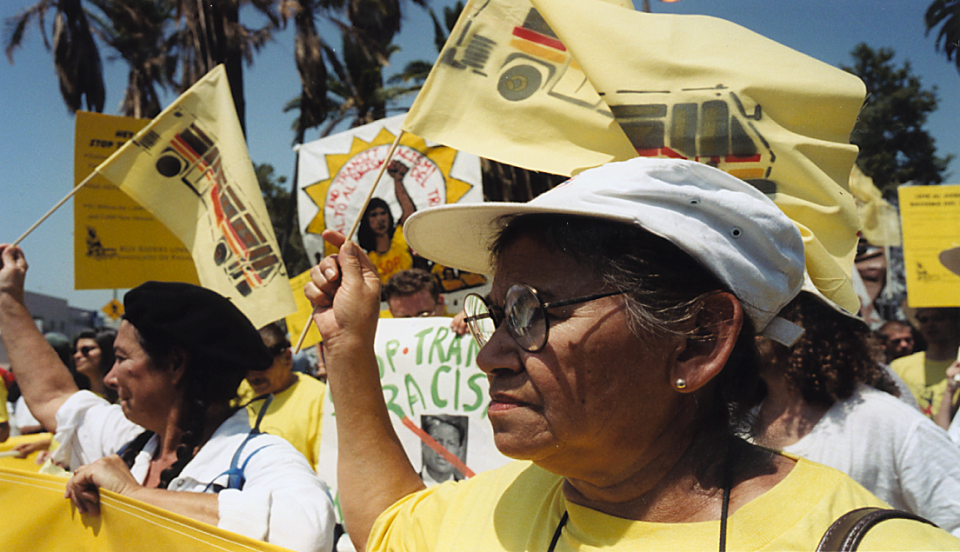 Let me take you way back to the spring of 1993, the first time I met Maria Guardado at a student club meeting of the Student Organization of Latinos (SOL) at Los Angeles City College. She was introduced at that meeting. After she cleared her throat, she recited one of her most enigmatic poems MADRE (Mother), a poem about a mother’s search for her kidnapped children in El Salvador. You could hear the pain, the emotion, the panic, that hope for one more search and yet the poem ends with hope and strength in the name of freedom. After declaring her poem, she continued with the detailed testimony of her torture by the Salvadoran military and their US advisors as they beat her, as they tried to break her body, mind and spirit. For me, it was one of those moments of clarity—both challenging and exhilarating—it’s almost like when I first read Malcolm X, it shattered something I knew was rotten but was programmed to think otherwise, which was both scary and liberating. Maria spoke of revolution; anti-imperialism; the misery caused by capitalism; El Salvador as a new colony; the need for building black and brown unity; and more importantly teaching us that those thoughts and ideas had to be put into action—take it to streets and win over the people, she’d say.

Since that day, my life and Maria’s life has intertwined in ways I couldn’t have imagined during that meeting—my first exposure to Salvadoreño history, Marxism, Cuba, revolution, was with the FMLN and the many veterans and young activists that took me under their wing. Maria, of course, was one of the anchors of the FMLN in Los Angeles. Not surprising given her affiliation to the Communist Party of El Salvador that dates back to the 1960’s, where she was part of a 10-person unit and the only woman. Her unit leader was none other than Shafick Handal. The same Shafick Handal who is a national hero for liberation and whose electoral run in 2004 electrified the country, the FMLN and the Latin American Left. I had the honor of going with Cynthia Rojas for the Strategy Center to cover the elections and document ARENA’s and the US rightwing attack on Shafick and his election with a media campaign that came with veiled threats of diplomatic sanctions, mass deportations, fear and lies—which momentarily defeated the FMLN’s run, but victory came five years later and now the FMLN has been able to win two straight presidential elections.

Maria was an important figure of the Bus Riders Union—she and many other Latin America leftists from the First Unitarian Church and their Monseñor Romero congregation were one of the first recruits to the Bus Riders Union—it’s like the left gods crossed for the Strategy Center and this group of Latin American leftists to meet. Maria, Ricardo and Noemi Zelada along with Pearl Daniels became name plaintiffs against the MTA in 1994—in the now historical LCSC, BRU vs MTA case and its consent decree that was able to secure over $2.7 billion of bus improvement and saved public transportation as we know it. Maria had been to over 20 years of BRU and LCSC meetings and actions—always there on the frontlines and who never lost sight that the fight for transportation justice for working class people in Los Angeles and helped lay the foundation of a socialist vision for a peoples’ reconstruction. In fact those were her words to me at my first BRU meeting back in 1999.
Maria worked in the Crack the CIA Coalition with Michael Zinzun and Representative Maxine Waters. Maria’s insistence on the connection between US intervention, the contra war in Nicaragua, the war on drugs and the devastation of the crack addiction epidemic in black and brown communities, all played a dynamic role in expanding the discussion and political work of this coalition, which was able to uncover the most sickest of crimes of the CIA and top US military and political officials of the 80’s and 90’s that accelerated the racist mass incarceration complex of today.
Maria’s life resume is really a who’s who of struggle and history making.

The Strategy Center will be publishing her book of poetry through Frontlines Press to be released this summer. I have the privilege of compiling her art and struggle, and for me it’s both deeply rewarding and daunting. I know that Maria’s words are really the words of my peoples’ struggle for liberation. It’s storied pain and victorious moments. It’s about Farabundo, Anastasio, Ana Maria, and a war for liberation and socialism and the devastation of neo-liberalism, torture, disappearances, and of US intervention.

Maria’s poetry is 80 years of a person’s life and the people that touched her life. It’s about Monseñor Oscar Arnulfo Romero, who she met when she was a child and who 20 years later called for her liberation from military jail cells. It’s about Rudy Pisani, her comrade in arms in Los Angeles, on the frontlines picketing at the US federal building in the 80’s to the 2007 MacArthur Park LAPD attack. They are odes to Father Roy Bourgeois, Ali Primera and Father Olivares and the lesser known sheros like Gloria Torres and la Abuelita Maria Luisa. It’s about you and me taking action. Her poems are battle cries for an anti-imperialist, socialist and Bolivarian front. Her poems are also the therapeutic words from a trauma and torture that only a few have ever experienced and lived to tell the world of. She tells us through her organizing, her poems, and her movie—which was beautifully executed by Randy Vasquez. And of course her poems have been heard and felt by thousands of young people who she has touched and mentored for over 30 years.

She battled cancer and gave a courageous battle almost like any battle she’s engaged in. It was hard to see my friend sick and her mortality in full display when I visited her, especially since she has defied death almost all her life. I know for many Maria is a symbol of courage and rebellion, and she is. And yet she’s like any of us, strong and sweet, courageous and scared, so very HUMAN. She’s always pushed us not to be fooled by short term victories or setbacks, not losing sight that true victory will be a revolution for human emancipation and transformation. I know, I’ll pray for her type of courage and conviction every day. ¡Maria Guardado, Presente!