Google+ Black Resistance Now! » Fight for the Soul of the Cities

Once we understand that we are at war, that leaves us with one option—nation building for dignity and self-determination. This is a nation forged through slavery, Jim Crow, mass incarceration, the urban ghettos and black belt south and most importantly a resistance movement of over 400 years that ended slavery, advance public education, defeated convict leasing and the outright US apartheid, and its spirit lives in Ferguson, Baltimore and South LA. We need a Black united front.
29
May 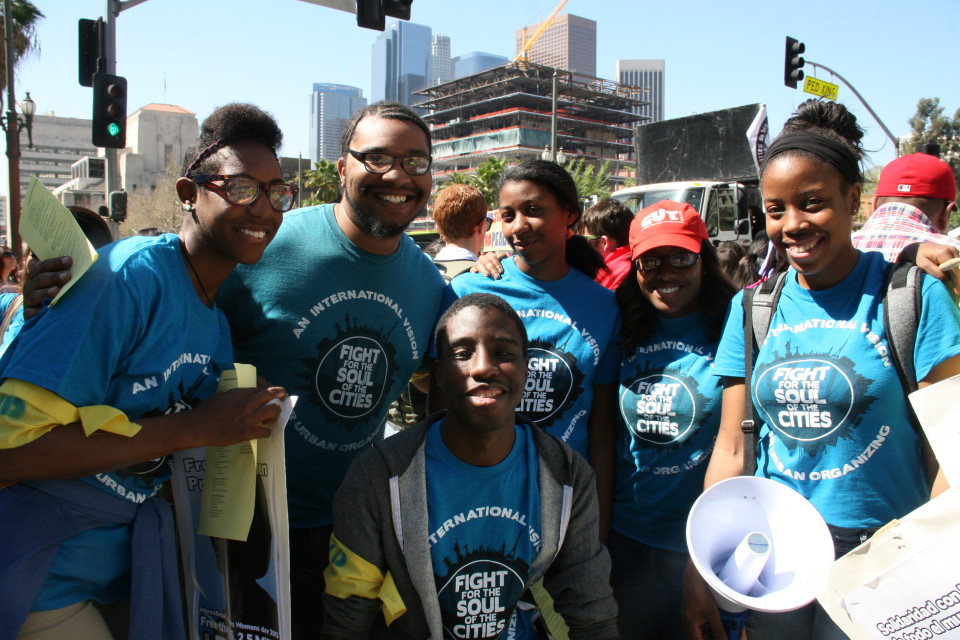 When I joined the Strategy Center, I was drawn to Eric Mann’s book Katrina’s Legacy, that called for the right to return home for the people displaced in New Orleans by Hurricane Katrina and for its bold demands on the government for the right to self-determination for Black people and to end the attacks on the Black community, from its denial of shelter for the survivors after the storm to the criminalization of their very beings. It was clear to me, that the Center placed Black people at the heart of the movement and I couldn’t imagine, 6 years later, that we would have to demand that Black people should have a right to live.

Over the course of the past 2 years, there have been millions of people who have taken to the streets after the murder of our community members like Aiyana, Ezell Ford, Freddie Gray and countless other people. When these protesters take their grief, frustration to the streets they are being met by an armed police force with tanks, reminding us that at the height of Black folks vulnerability after the storm, they too were met with tanks and armed guards.

We must understand that from Katrina to the murders of black people by armed police forces—the US is at war with the Black Nation. This war has manifested itself as a counterinsurgency of unemployment and the divestment in our neighborhoods to prioritize police and militarization. This war has lasted for the past 40 years, from LA to Baltimore—from the creation of SWAT by LAPD to attack the Black Panther Party, COINTELPRO’s outright war on the Black Liberation Movement and the bipartisan attack on all the Black civil rights victories and black livelihood through coded terms like war on crime, drugs, and gangs, which essentially means attack by any means necessary all Black and Brown poor people. Now we face a blatant declaration of police murder with the Department of Defense 1033 Program that creates militarized “warrior cops” to occupy our neighborhoods and preparation for a new revolution that people itself can’t even truly imagine or conceive in these times.
But enough is enough. Today, there is a spring of insurgencies where people are taking to the streets from Ferguson, New York, Chicago, Cleveland, Baltimore and even electoral insurgencies in Jackson, Mississippi and Newark, New Jersey demanding Black liberation and Fight for the Souls of the Cities is committed and contributing to this Black-led resistance struggle. However, going to war in not a walk in the park because we have all witnessed what happened to Paul Robeson, WEB Dubois, Claudia Jones, and the killing of Fred Hampton and George Jackson. Or exiled like Assata in Cuba and Mumia who is dying slowly because the masses fought to overturn his death penalty. When we try to disrupt or derail the status quo, they employ poison, harassment, prison or death to stop us.

Once we understand that we are at war, that leaves us with one option—nation building for dignity and self-determination. This is a nation forged through slavery, Jim Crow, mass incarceration, the urban ghettos and black belt south and most importantly a resistance movement of over 400 years that ended slavery, advance public education, defeated convict leasing and the outright US apartheid, and its spirit lives in Ferguson, Baltimore and South LA. We need a Black united front. And we are seeing people in the streets of Ferguson and Baltimore doing just that, such as the truce between the Bloods and Crips. All black forces for liberation need to unite because for too long the battle has been our differences and contradiction among each other— young vs old, women vs man, straight vs queer, pan African vs Marxist but at the end of the day officers and this government see Black, and treat us a threat. Thus using lethal force first and creating an explanation later as to why. So let’s be clear, our enemy is white supremacy and the imperialist war of genocide that has engulfed 2.5 million prisoners, mis-educated and pushed out generations of young people, and has 1.5 million black men gone missing.

However, organizing young people and working class people is hard work. I put in 10-12 hours a day to organize myself, dozens of young people, two schools, younger organizers and volunteers, and while often very rewarding and there’s always new terrain that’s being won—it can also be very lonely and hard to put yourself out there. The hundreds of daily challenges between my will, the people’s will and the systems’ tools of demoralization, miseducation, poverty, self-hatred and illusion-prone culture are too real—sometimes opportunities and hard work meet, and you excel, other times it’s a struggle to get two people to a key meeting or vote. So I am constantly thinking about how I can stretch myself and yet not lose sight that our work in the school, on the bus or a train, at the school board, or in the neighborhood are keys for any reconstruction.

There is hope. Fight for the Soul of the Cities, Bus Riders Union and the Community Rights Campaign, our next year we will focus on and demand of President Obama the right to protest and resist; calling to demilitarizing police and ending the war on the planet, with a frontloaded, verifiable and enforceable 50% reduction of greenhouse gas emission starting now—No Cars/No Tanks in LA is the intersection of Black liberation and climate justice. We need to stop the Black genocide and environmental Armageddon by ending the Department of Defense 1033 Program, demilitarizing LAUSD and LA County, stopping LA Metro Stop and Frisk Apartheid system and shaking up the Paris Climate Talk—these are our goals because as Katrina’s Legacy showed us, the system will use any excuse to undermine our livelihood and existence.