Google+ COP21: US is ‘Major Obstacle’ to Climate Change, Says Manuel Criollo » Fight for the Soul of the Cities 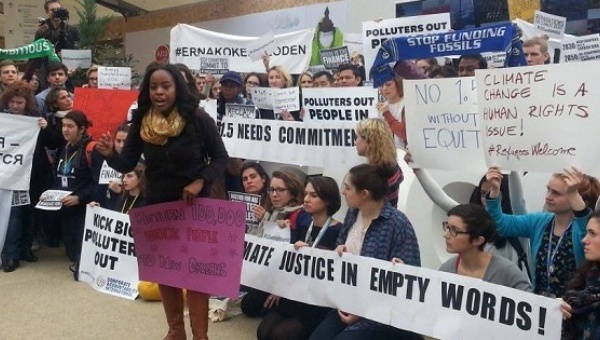 teleSUR English speaks to Manuel Criollo, the director of organizing at the U.S.-based Labor rights and environmental campaign group The Strategy Center about the possible failure of nations to reach an agreement in COP21 climate change talks and what any forthcoming pact could mean for Latin America.

Delegates from numerous countries have been locked in negotiations for hours in a bid to thrash out a climate change pact and have yet to reach a total agreement. As a result, the summit’s official closing date is being extended. What are the stumbling blocks the negotiators have faced in their talks for the 2020 climate change agreement?

Manuel Criollo: The story stays the same as it has for the past 20 years during this tragic climate chess game called the United Nations Framework Convention on Climate Change: On one side, the ex-colonial and imperialist powers of Europe, Japan and the white-settler nations of the Canada, New Zealand, Australia and the United States (its ringleader) and on the other side, stand the nations and peoples of the Third World (in U.N.-speak often referred as Developing Nations). It’s been a game of attrition, bullying, intimidation, divide-and-conquer and the constant changing of the rules at every turn.

The binding agreement has to recognize and compensate for the climate crimes and climate debt that these Developed Nations (developed out of colonial and imperial plunder) have and will continue to cause on the planet.

As a new draft of the Paris climate talks hits the halls of the U.N., one of the most important and yet utterly complicated early outcomes has been the embracing of a 1.5 degrees Celsius threshold by many parties, including the United States, to not surpass this climate threshold—a critical demand that many people of the world and those most impacted by the global warming have advocated for. Yet as negotiations move forward the details of the draft would render this important threshold a toothless and unenforceable goal and worst it would attempt to circumvent the idea of what been called “loss and damages” (U.N. talk to say climate reparations) for the climate crimes caused by the advent of U.S., European, Japanese colonial capitalist polluting development over the past 150 years….


Tags: Climate, Climate Change, Climate Crimes, Climate Generations, Climate Reparations, Cop21, GOCOP21, UNFCCC, What are we going to do about the U.S.