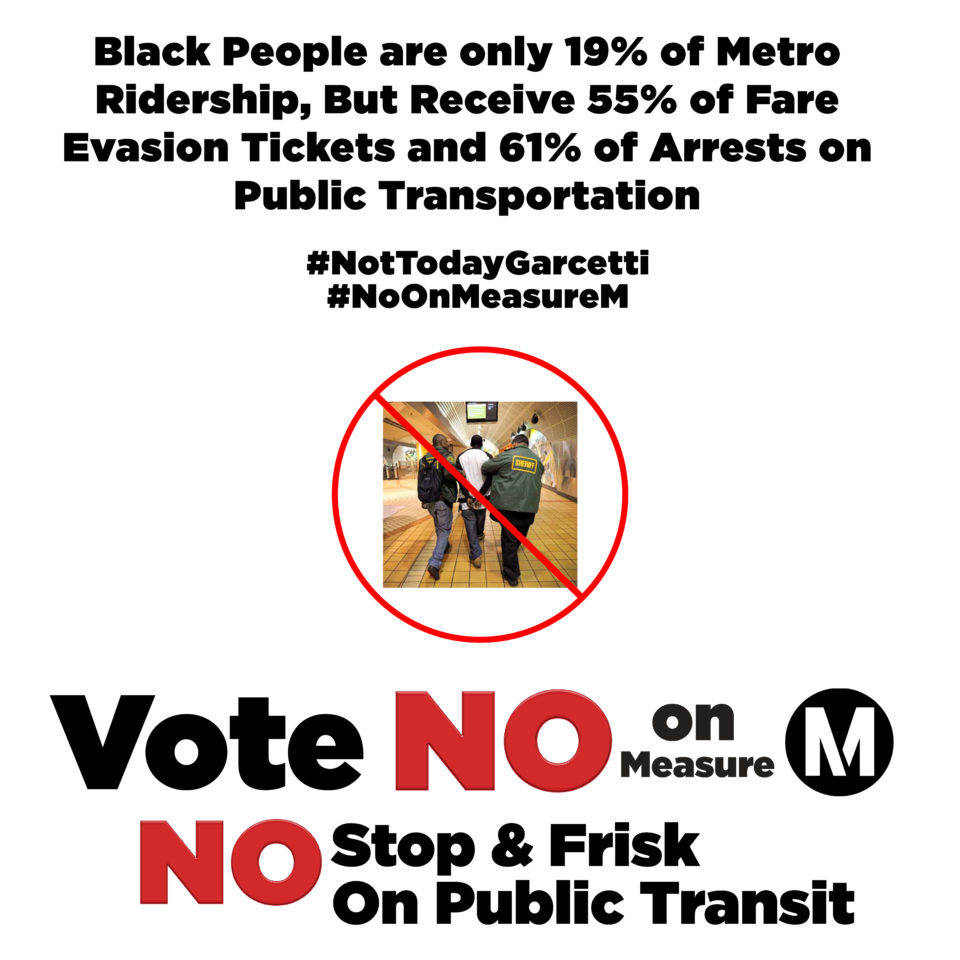 For LA Metro Black Lives, Don’t Matter.  LA Metro criminalizes black riders who are only 19% of riders, but make up over 50% of all LA Metro fare citations, fines and arrest are Black riders on Metro rails – Black riders are stopped, check, profiled, harassed, frisked, cited, fined, jailed, and beaten all forms of dehumanization of Black life to ensure a sterile lily white rail experience for LA Metro imaginary and non-existing choice rider.  The current war on the Black Nation is so present in the US criminal legal system and the modern day ‘black codes’ under the name of ‘stop and frisk’ and so reflective in the spectate lynching of Black men, women and children by police.  In Los Angeles, Black Genocide is so present in the dispersal of the Black community out of south Los Angeles, large scale unemployment, asthma clusters throughout South Los Angeles sandwiched in between four major freeways.

The MTA is a corporate development machine commandeering $5 billion in our L.A. county sales taxes, state taxes, and federal taxes to build corporate gentrification projects and payoffs to corporate contractors for rail projects that cost a fortune, wreck and raid the bus system, and leave 500,000 Black and Latino, women, working class, low-income, elderly, student, disabled transit riders over-crowded, late, waiting, and policed by armed sheriffs who are “checking” to see if they have paid their fare-“the stop and frisk” for passengers. With regular searches and exorbitant tickets now commonplace when they can’t come up with $1.50, public transit is becoming just another public space where their mere presence is criminalized. The biggest winners are the Los Angeles Sheriff Department with a contract that’s now ballooned to $85 million annually. The MTA tries to deflect its corporate crimes criminalizing its own passengers- making their ride a police state experience. These passengers are already paying 3 1/2 cent sales taxes that give the MTA $2 billion a year-they are paying many times over for lousy service and corporate exploitation.

We are working toward ending the LA Metropolitan Transportation Authority transit “stop and frisk” and criminalization of fare evasion and 1) Win free fares, 2) Defund LA Sheriffs at LA Metro, 3) Reduce overall emphasis on checking passengers, to take County Sheriffs completely out of fare checks, and to end the entire MTA ‘court’ system and 4) Abolish the racist LA Metro “Code of Conducts”. The present policies violate the civil rights of all 500,000 MTA passengers subject to these practices. We believe the police and Sheriffs’ treatment of Black and Latino passengers would warrant a Justice Department investigation of discriminatory police practices. The MTA’s use of armed sheriffs to “stop and inspect” and “stop and frisk” MTA passengers is racist and unacceptable. The present policy makes the transit ride for young people, immigrants, almost all MTA passengers another stop in the police state, a literal transit apartheid state. The only real solution is free fares for all.

The analogy of the structure of policing and fare checks on the MTA can only be compared to a South African Apartheid pass system, is a way to demonstrate the nature of who is stopped and checked by police (at their discretion) and the racist suppression tactics that seem deliberately anti-Black given the extremely high levels of arrests and tickets toward Black riders. We believe this is an important contribution to not only expand the discussion to another form of oppression experienced by the black community, but also to attempt to break from the more traditional arguments of racial disproportionality and disparate impacts that tend to limit the ability to achieve a meaningful remedy. This campaign is a human and civil rights struggle against a much more deeply ingrained form of black oppression than disproportionality, and to discuss police suppression in the form of ticketing and arrests on public transit as an element of the systemic and persistent genocide against black people in the U.S.

We are building a case against the LA MTA and its employed and contracted police for violations of Title VI of the Civil Rights Act of 1964, the Equal Protection Clause of the 14th Amendment to the U.S. Constitution and all relevant state and federal laws protecting against police brutality and racial discrimination.

LA MTA is ticketing and arresting its passengers, despite $5 billion in sales tax revenues, much of that from low-income riders, and systematically targeting Black riders who each year represent at least 50% of the citations and 58% of the arrests, while they are only 17%-19% of bus and train ridership. While perhaps the most documented form of racial animus is happening through police fare checks, ‘stop and frisks’ and ‘quality of life’ citations and arrests, the systemic criminalization, policing and targeting of Black transit riders is tied to a much deeper pattern and practice of racial discrimination.

We therefore call on the Department of Transportation and the Department of Justice to acknowledge and remedy this pattern and practice of racial discrimination and civil rights violations. And we urge them to acknowledge and remedy the evidence of a much larger and systemic attack on Black LA residents. At its core, we call on the DOT and DOJ to find that the criminalization of Black riders on LA MTA is evidence of a set of institutionalized policies and practices to further the pre-determined and gentrified re-shaping of LA through the creation of persistent, severe and irreparable economic and psychological harms that occur through the foreclosure of opportunities, through the denial of equal protection, and through the mass geographic and segregationist dispersal and displacement of the Black community – amounting in its totality to a U.S. genocide against Black people. [1]

[1] Genocide is defined in Article 2 of the Convention of Prevention and Punishment for the Crime of Genocide (1948) as any of the following acts, committed with the intent to destroy, in whole or in part, a national, ethnical, racial or religious group, as such: (a) Killing members of the group (b) Causing serious bodily or mental harm to members of the group (c) Deliberately inflicting on the group conditions of life calculated to bring about its physical destruction in whole or in part (d) Forcibly transferring children of the group to another group.