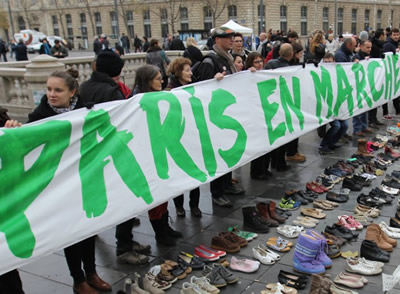 President Barack Obama’s mission in Paris should be to join the world, not dominate it.

We demand that he make real climate changes.

The world is demanding that the United States dramatically reduce its emissions and pay climate debts to third-world victims of its obsessive production and consumption.

Please join with the Labor/Community Strategy Center organizers who are in Paris calling on President Obama to take serious steps:

We are calling on President Obama to announce in Paris (and return home to vigorously promote) these measures:

— The United States contribute $10 billion a year to the United Nations Green Climate Fund to help finance third-world transitions to cleaner fuel and to pay for “loss and damages” caused by U.S. and E.U. emissions since 1850.