Google+ Standing Up against Racist, Fascist, Nazi, Swastikas in South L.A. » Fight for the Soul of the Cities 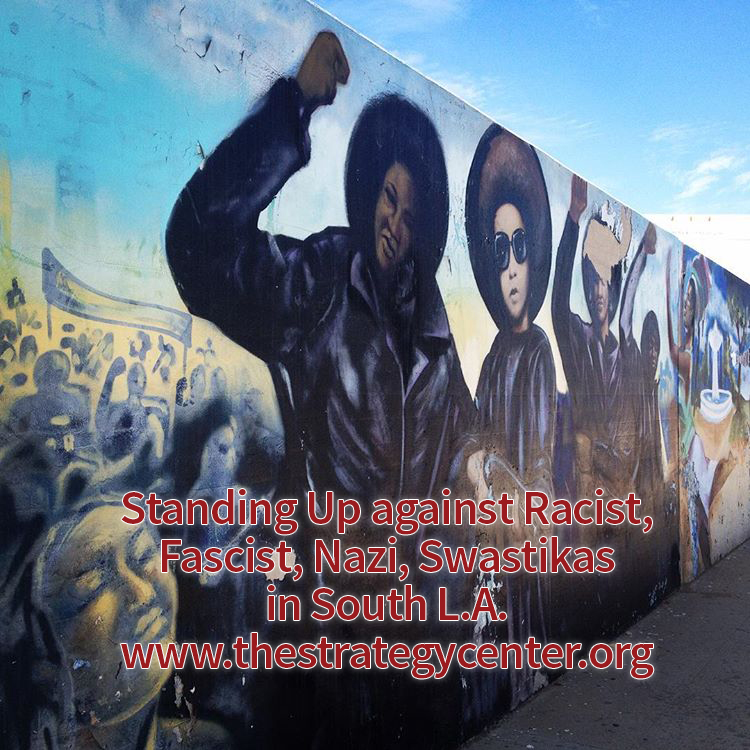 Statement of the Labor/Community Strategy Center

Standing Up Against the Attacks on the Black Community,

and all of us!

The defacing of an historical mural on Crenshaw Boulevard, Our Mighty Contribution,” by placing swastikas over the faces of Black women members of the Black Panther Party is profoundly symbolic and real–a material reflection of the U.S. white settler state out of control. For us at the Strategy Center, the fight against racism, national oppression, and our deep ties to and love for the Black and Latino communities in particular, and all oppressed people, are rooted in an internationalist, anti-imperialist perspective and the long history of Black and Third World liberation movements inside and outside the United States. During The Sixties, we all knew we’re fighting against “the white power structure” and agreed with Dr. King that “the United States, our own government, is the greatest purveyor of violence in the world.”

Not surprisingly, if classically brazen and pathetic, the LAPD described it as “an isolated incident” —perhaps, with a sense of unintentional irony, they meant compared to their daily and conscious practice of brutality, racism, and occupation.  But let’s be clear, there is nothing “isolated” about it. Today, the Black Community in Los Angeles is under systematic attack by a two-party capitalist system that sees South L.A., as Professor Cynthia Hamilton observed, as land that is valuable but a people who are not. As late as 1970, a once vibrant, if embattled Black community in Los Angeles had a population of 750,000 members, 25% of the population of L.A.’s 3 million people.  Today, as L.A.’s population has grown to 4 million, the Black community has declined to 350,000 people—less than 10% of the city and county.  The defacing of the mural is the act of some racist thugs, and do not rule out conscious and organized right-wing organizations, but is also representative of U.S. and L.A. policies of gentrification and 24/7 police occupation. It is also reflected in the L.A. MTA raising the monthly bus/rail pass to $100 and then arresting and ticketing passengers—and singling out Black passengers, for “fare evasion” making it a crime to ride public transportation if you can’t afford to pay. Look at how many restaurants, stores, public places have virtually no Black employees as there is a “white list” against hiring Black people who the system believes are too independent, thoughtful, happy, and self-respecting to be the docile and obedient employees they seek–and can never find anyway.   This is also  The System’s Big Payback and White Backlash against the great sacrifices the Civil Rights and Black Liberation Movements for all they gave for the liberation of all people including the people of Vietnam.

It is hard to know where to start or finish as The System aka U.S. imperialism is now in such free fall that a raving, racist, proto-fascist is president and half the country–certainly the majority of the white oppressor nation–still enthusiastically supports his attacks on Mexicans, Hondurans, Blacks, Indigenous peoples, women, gays, and all the “others” who are in fact the heart and soul of whatever positive future can be built in revolutionary opposition to this dying empire.

So what in the world can we do? First, just feel bad, then terrible, then enraged at the defacement of Black art and Black people. Thanks to all who have worked to rebuild the mural—and then turn rage into far greater dedication and commitment to fight this system with all of our hearts.

* Give generously on Black Friday, and Black everyday to organizations working to help the Black community in South L.A. and throughout the U.S. and among many, big props to Black Lives Matter for calling the question front and center.

* Fight for Open Borders, Full Amnesty, and making human rights for all legally and morally binding for all residents regardless of citizenship

* Stand up to, misogyny, homophobia, attacks on Arabs and Muslims, attacks on and hatred against Jews, support the people of Palestine, fight racism and hatred in every form both aggressive and subtle—and remember, there is no such thing as a “joke” degrading any other people. When you are attacked with the response, “Can’t you take a joke?” the answer is, “Hell no you damn racist!”

* For those of us in the Movement, we have to truly cherish each other, forgive each of us our trespasses, and bring generosity of spirit into our discussions and negotiations especially when tensions are at their highest. If we don’t truly believe we need each other, which we do, believe in the strategic imperative of a united front against fascism and imperialism, which we do need urgently, we are doomed and we can’t blame Trump, or the Democrats, or the System if we are the problem.

The Strategy Center, as our small part of the solution, has built the Strategy and Soul Movement Center in South L.A. at the corner of King and Crenshaw,  to bring films, books, food, and  transformative organizing to a community we love. We are building a multi-racial, Black/Latino led, movement for social, racial, and climate justice. We are fighting for Free Public Transportation, No MTA Police on Buses and Trains, No Police in LAUSD Schools, No Cars in L.A. and Stop MTA Attacks on Black Passengers. We send our deep solidarity and regards to our friends and allies at Community Coalition, CADRE, SCOPE, St. Johns Wellness, Black Workers Center, Black Lives Matter LA, Crenshaw Coalition Against Gentrification, CHIRLA, LACAN, Black Workers Center–to just name a few–and ask those working to protect and rebuild the murals and other forms of public and protest art in South L.A., South Central, and throughout the city to reach out to us to ask for help. We can assure you, we will respond enthusiastically/

These acts of public racism, xenophobia, misogyny, and homophobia are neither crazy nor random. They are systematic reflections of the ideology and strategy of a dying system. The system is at war with us. The challenge to all of us is— are we willing to up the ante to build up our army and fight even harder on our side of the war.  Victory is not certain, but it is possible and urgently necessary.

With warm if broken hearts. We send our deep love to all.