Google+ Selena Lechuga, Latina, attacked by MTA police for standing up for the rights of others, meets the press » Fight for the Soul of the Cities

Selena Lechuga, Latina, attacked by MTA police for standing up for the rights of others, meets the press

Selena Lechuga, Latina, attacked by MTA police for standing up for the rights of others, meets the press 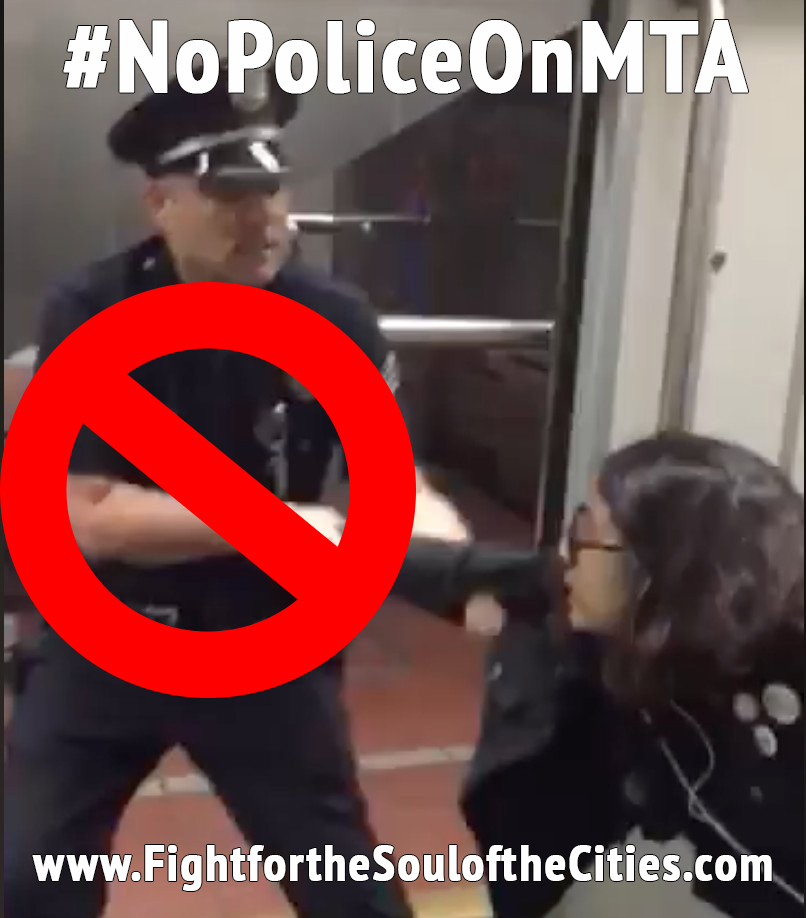 Selena Lechuga, Latina, attacked by MTA police
for standing up for the rights of others, meets the press

Selena Lechuga was on an MTA train on Monday January 22 at the Macarthur Park station. She witnessed MTA police misconduct towards another passenger, a young woman, and spoke up against what she believed was racist and sexist behavior—simply asking the officer to cease and desist in his behavior. For that act of kindness and compassion she was arrested by MTA police and held for 24 hours during which time she had no contact with her family. She was denied water, food, and contact with others. Finally, she was allowed to call for help and was released. She is facing charges that are unjustified and retaliatory.

The Labor/Community Strategy Center has been challenging what we believe is MTA Transit Racism since 1994. We have brought the MTA to court for violating the 1964 Civil Rights Act in 1996 and won a ten year Consent Decree with the MTA on behalf of 500,000 bus and train riders (50 percent Latino, 20 percent Black, 60 percent women, overwhelmingly low-income) including getting the MTA to purchase 2500 new Compressed Natural Gas buses, add 1 million hours of service, and reduce fares. The result—MTA ridership went up 20 percent.

Since the MTA Consent Decree expired in 2006 MTA has reverted to its racist policies—cutting 1 million hours of bus service, raising the monthly bus pass from $42 to $100, and creating a police state on the buses and trains leading to the citations and arrests of more than 700,000 of their passengers. The MTA has criminalized passengers unable to pay their fare, unable to find their TAP card, and for “quality of life” infractions like putting their feet on the seats, eating, and other normal behaviors to justify a $759 million police force. It is no wonder that despite an annual budget of more than $6 billion and 4 LA County sales taxes, MTA ridership is down!

The Strategy Center is bringing new civil rights charges against the MTA for police abuse against Black passengers who are 19 percent of all MTA passengers who receive more than 50 percent of the citations and arrests. Obviously this abuse extends to Latino passengers as well such as the late Cesar Rodriguez who was pushed or driven in front of an MTA train by Long Beach police at the Wardlow MTA Station. Now we have seen on video, in the case of Selena Lechuga, another example of MTA racial discrimination and police brutality.

Tomorrow at noon, Selena Lechuga will speak for herself about her own experience in her own words.

In her view, she sees her situation as part of the broader crisis of structural racism against women, Blacks, Latinos and low-income people. And out of her view that she had a responsibility to stand up for the rights of others, she suffered police brutality and unjustified arrest. We are calling on the MTA to drop all charges against her and to dismantle the entire system of racist and abusive policing on MTA buses and trains, and to move to free public transportation for all.