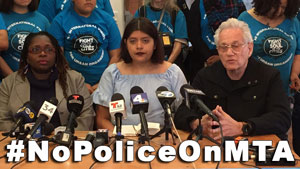 You saw the video. I was one of “those young Latinas who stood up to police brutality on the trains” and in return was arrested by the police. They handcuffed me, took me to jail, denied me food, water, contact with my family for 24 hours. It was a truly terrifying experience. The MTA is making riding on the train a crime because their riders are 55% Latino and 20% Black. MTA has a “code of conduct” that makes anything—putting your feet on a seat, eating a sandwich, even “body odor” a crime. The MTA and the police in my view are the ones carrying out the crimes.

When I got out of jail I was contacted by Strategy Center organizer Elmo Gomez who immediately supported me.  Strategy Center director Eric Mann has been working with me and my brother every day and helped to organize a great press/media conference at the Fight for the Soul of the Cities community office at 3546 Martin Luther King at Crenshaw—part of the Strategy and Soul Movement Center. The Strategy Center also helped me get a great attorney, Nana Gyamfi, who is representing me and we want the City Attorney to not file charges in my case.

Now we are dues paying members of the Fight for the Soul of the Cities and plan to testify in front of the MTA on Thursday, February 22 We call on them to drop the charges against all MTA passengers and stop the racist fare collections and codes of conduct. So here’s how you can help.