Google+ Friday, April 22nd Rally and Action at LAUSD Headquarters at 3:30 PM » Fight for the Soul of the Cities 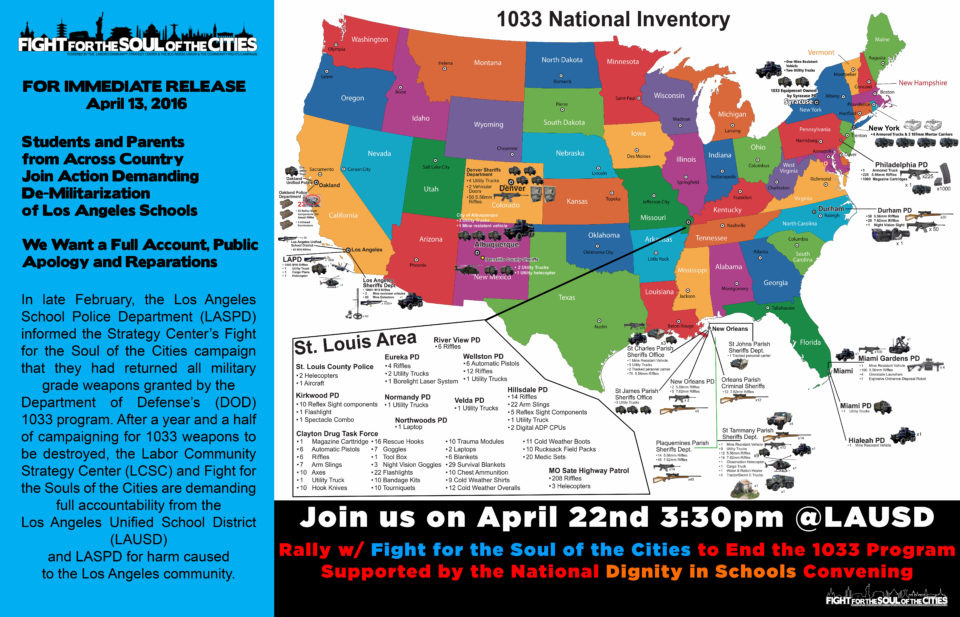 Los Angeles– In late February, the Los Angeles School Police Department (LASPD) informed the Strategy Center’s Fight for the Soul of the Cities campaign that they had returned all military grade weapons granted by the Department of Defense’s (DOD) 1033 program. After a year and a half of campaigning for 1033 weapons to be destroyed, the Labor Community Strategy Center (LCSC) and Fight for the Souls of the Cities are demanding full accountability from the Los Angeles Unified School District (LAUSD) and LASPD for harm caused to the Los Angeles community.

Strategy Center will hold an action on April 22 at 3:30pm at the Los Angeles Unified School District administration building with community members and students and parents from across the country of the Dignity in Schools Campaign (DSC). The action will be a call for the LAUSD and the LASPD to provide transparency about their involvement in the 1033 program and a public apology. The organization will also call on the Obama Administration to end the DOD’s 1033 program and demand that LAUSD and LASPD take the following steps to repair the harm caused to the Los Angeles community:

•     A full documented history of LAUSD and LAUSD involvement with the 1033 program, including a list of weapons received and returned to the DOD with documented proof.

•     A public letter to LAUSD parents, students, teachers and other stakeholders including Labor/Community Strategy Center and Fight for the Soul of the Cities coalition stating that LAUSD and LASPD have completely withdrawn from the DOD’s 1033 program.

•     Full documentation of LAUSD and LASPD leadership role in applying for the 1033 program and the reasoning behind the action.

•     Reparations for harm caused to community members and a commitment from LAUSD to cut the LASPD budget by 50%, reduces the LASPD police force by 50% and reduce the amount of existing LASPD weapons by 50%.

•     Hold LAUSD Board of Education meetings at convenient times for full community engagement and restructuring of meetings to maximize public participation and district engagement.

Join the Labor/Community Strategy Center and the Dignity in Schools Campaign to call on LAUSD and the LASPD to de-militarize Los Angeles schools.

WHAT: Action to end militarization of Los Angeles schools

WHO: 100’s of Parents, students and community members of Los Angeles and members from 34 organizations representing 16 states of the Dignity in Schools Campaign