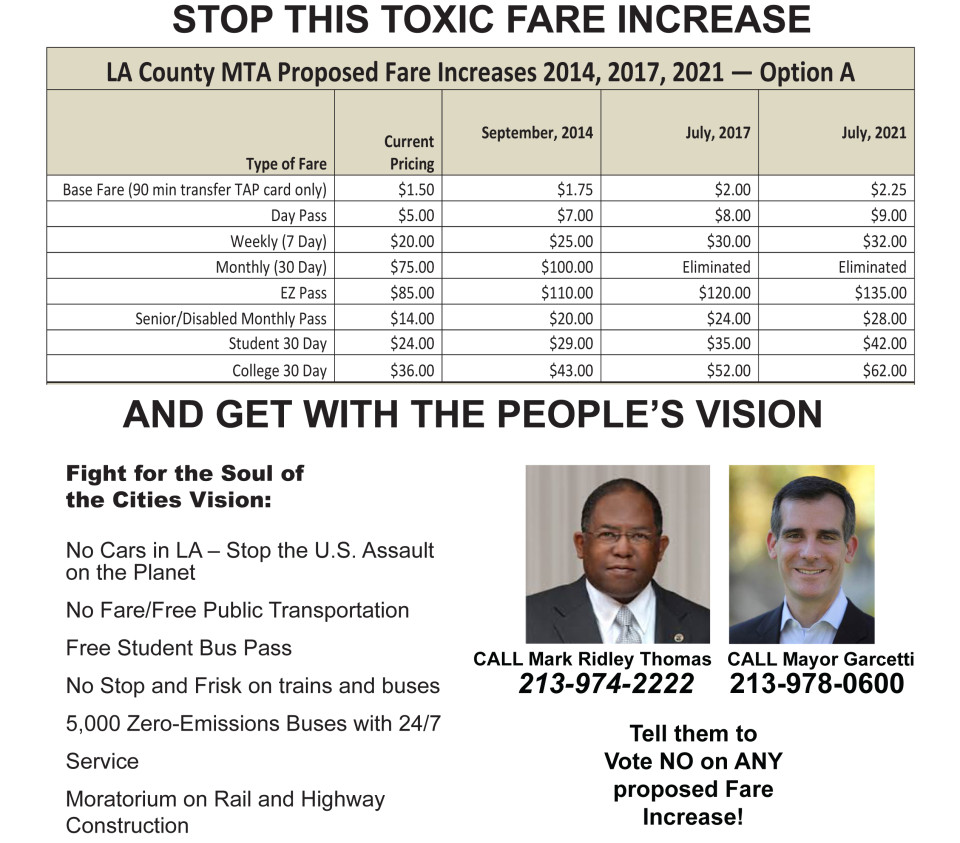 We are writing to request a meeting with you to discuss our proposal below to dedicate the March 29 Public Hearing to discuss our comprehensive proposal for the best use of your $4.95 billion budget and our complete opposition to your proposed rail and highway construction/fare hike proposal. We are asking the MTA, the civil rights, human rights, immigrant rights, environmental and environmental justice, public health, and clergy communities to support the Labor/Community Strategy Center’s Fight for the Soul of the Cities and our No Cars in L.A. campaign platform. We ask the MTA to reverse its present “privatizing, polluting, policing” policies and adopt our proposals below. MTA’s current fare increase proposal includes the following:

As you know, this conversation has been taking place between the Bus Riders Union and many community groups with the MTA since 1992. Only through a temporary restraining order by the Federal District Court in 1994 were we able to stop your efforts to eliminate the monthly bus pass altogether and raise the bus fare from $1.10 to $1.35.  Only through a negotiated Consent Decree between the BRU and MTA for 10 years (1996 to 2006) backed up by federal court orders were we able to get the bus pass reduced to $42 for seven years—all despite the MTA appealing all the way to the U.S. Supreme Court on a “states’ rights” platform. You tell the public, truthfully, that you now have “the largest clean fuel bus fleet in the U.S.” but do not explain that the Bus Riders Union made it happen, another victory of the federal Consent Decree. Since the end of the Consent Decree in 2006, you have moved against civil rights and against bus riders with a vengeance. You cut the same one million hours in expanded service the BRU won. You raised the bus fare from $42 to $52 to $75 and eliminated your own department to document overcrowding on the buses. You’ve gone on a rail and highway building rampage supported by increased sales taxes. In 2007, 350 people literally begged you not to raise the transit fares, and then you went ahead and raised them. People come to testify and you treat them with contempt. For new MTA board members, we ask you to completely disassociate yourselves from this agency’s history of polluting the environment, violating civil rights, attacking its own passengers, arresting them, leaving them in the rain and cold, and when they come to complain, surrounding them with police, cutting them off in mid-sentence, and not once addressing their concerns. For those who have participated in these policies, we ask you to change your mind and reverse this history. We ask each of you by name to show a sense of decency and withdraw this motion and to work with us to reduce bus fares now. The following demands represent our own platform and vision for transportation in Los Angeles County for the short and long term:

We make the following arguments to support our proposal above. Current MTA policies are destroying any chance to strike a blow against climate change. Within 35 years, global average temperatures will be hotter than historical extremes. That is one finding of a study published late last year in Nature, which attempts to create a region-specific index of climate change. According to the study, if carbon dioxide emissions continue unabated, Earth’s mean climate could depart from historical averages in 2047. “Very soon, extreme events will become the norm,” says lead author Camilo Mora, an environmental researcher at the University of Hawaii at Manoa. The study that found that aggressively cutting greenhouse-gas emissions to stabilize the level of carbon dioxide in the atmosphere would delay the timing of Earth’s overall ‘climate departure’ by 22 years, until 2069. “Twenty years is not a lot of time, but it could be a window of opportunity to prepare ourselves to adapt to these new climate conditions,” says Mora. James Hansen, the country’s most prescient climatologist, is out with another must-read paper, “Climate sensitivity, sea level and atmospheric carbon dioxide.” The paper, co-authored by a number of Hansen’s former colleagues at NASA, is an antidote to the rosy scenarios the mainstream media have recently been pushing.  The key findings are:

Burning all or even most fossil fuels would be a truly scorched Earth policy.

In light of this information, present MTA policies position the agency as a big climate polluter, a bad actor, a global warming denier, and a contributor to mass suffering in the world.  The MTA is increasing auto emissions in Los Angeles by building super expensive rail with low ridership, then stealing money from the bus budget to pay for it, cutting bus service, raising fares, and giving the highways millions of dollars to expand.  The 6.5 million cars in Los Angeles County are a major source of greenhouse gas emissions. In the City of Los Angeles, transportation already accounts for 48% of all greenhouse gases and the emissions from people living in suburban areas has shown to be double those in the city. In California, 58 percent of emissions from gasoline-powered vehicles and the state generates more greenhouse gas emissions than all but 20 countries in the world. As the world is calling on Los Angeles to take drastic action, the MTA has given lip service to climate concerns but is now a big part of the problem—not part of the solution.

In the early 1990’s, the agency destroyed the bus system and then was forced to rebuild it under federal court order. In 2007, at the end of ten years of investment in the bus service and lower fares—all ordered by the federal courts—MTA’s ridership was nearly at an all-time high. Then the agency turned itself into a gentrifying construction agency, building rail projects at enormous expenses with very few riders. This new construction boom was made possible by growth in the MTA’s budget from $3 billion to $5 billion, and that growth was made possible in large part through the injection of $700 million in new annual revenue with the passage of Measure R in 2008. Yet in the same period—2007 to the present—the agency cut one million hours of bus service and raised fares twice. Despite the misplaced hype around the opening of two rail lines in 2009 and 2012, these fare hikes and service cuts have pushed people off the system, and overall transit ridership is still substantially lower than it was in 2007. Worse, the MTA has created an unholy alliance with the highway lobby against bus riders and the bus system­—an alliance critical to the passage of Measure R—so that the MTA actually advocates expanding freeway service at the same time it cuts bus service and ridership.

MTA policies are racist attacks on the Black and Latino working class. Present MTA policies are a mean-spirited, racist, attack on working people. These increases will pose cruel and unnecessary financial hardship on hundreds of thousands of Los Angeles County residents, and are a direct attack of 500,000 MTA riders who are at least 55 percent Latino and 20 percent Black, 65 percent women with family incomes between $15,000 and $25,000 a year. Under this proposal, transit costs for a transit-dependent family of four by the year would increase by 2021 by nearly 80% or $2,000 under Option A 126% increase and $3,200 under Option B.  The idea of raising “public” transportation fares on the most low-income public, to raise fares on security guards, hotel workers, janitors, students, young people in and out of the criminal injustice system is truly cruel and unusual punishment, and vindictive public policy. You know these policies will literally be taking food out of children’s mouths, clothes off their back, and a roof over their heads.

Free Public Transportation: We are already paying too much for MTA service. “Fare box recovery” is an artificially created concept to get money for MTA service that has already been paid for by the public through 3 separate sales taxes, including Measure R in 2008. In that sales tax, the MTA promised the voters that 20 percent of the funding would be used for bus service. But in a cynical bait and switch, MTA simply used money from Measure R to replace other funds previously used for bus service, and moved those funds to rail operations, construction and other expenses. This theft of bus funds creates the artificial “operating deficits” now being used to justify fare increases. The upshot is that free public transportation and a free student bus pass would not in fact be free, but would be paid for out of sales taxes and other tax revenues already paid by the public—but based on profoundly different MTA policy choices. Free public transportation and a free student bus pass would dramatically increase ridership, get many people out of their cars or even give up cars as too expensive, and provide greater mobility and significantly fewer toxic and greenhouse gas emissions.

Stop “Stop and Frisk” on the buses and trains. Remove all Sheriffs’ officers from the trains and stop the practice of “fare enforcement.” End “Stop, Frisk, and Ticket” on LA public transit.  We are deeply concerned that while MTA proposes to raise fares, the Sheriff’s Department is escalating a racialized attack on MTA riders in the name of “fare enforcement.” Black and Latino young people are the primary target. With regular searches and exorbitant tickets now commonplace when they can’t come up with $1.50, public transit is becoming just another public space where their mere presence is criminalized.  Recent stories point to a pattern of unwarranted brutality by the Sheriffs against passengers, yet the MTA’s rewards the Department with a contract that’s now ballooned to $85 million annually. We demand an end to the criminalization of fare evasion on all MTA buses and trains. No Sheriffs or MTA Police can be used to check passenger fares.

The fight to reverse these fare increases is just the tip of the melting iceberg. We urge you to make a full 180 degree u-turn on previous MTA policies and work with the Bus Riders Union and many community organizations to:

Again, we look forward to meeting in person to discuss all these matters. We will be in touch to set up a meeting and you should also feel free to contact Eric Mann or Barbara Lott-Holland at 213.387.2800 / info@thestrategycenter.org.