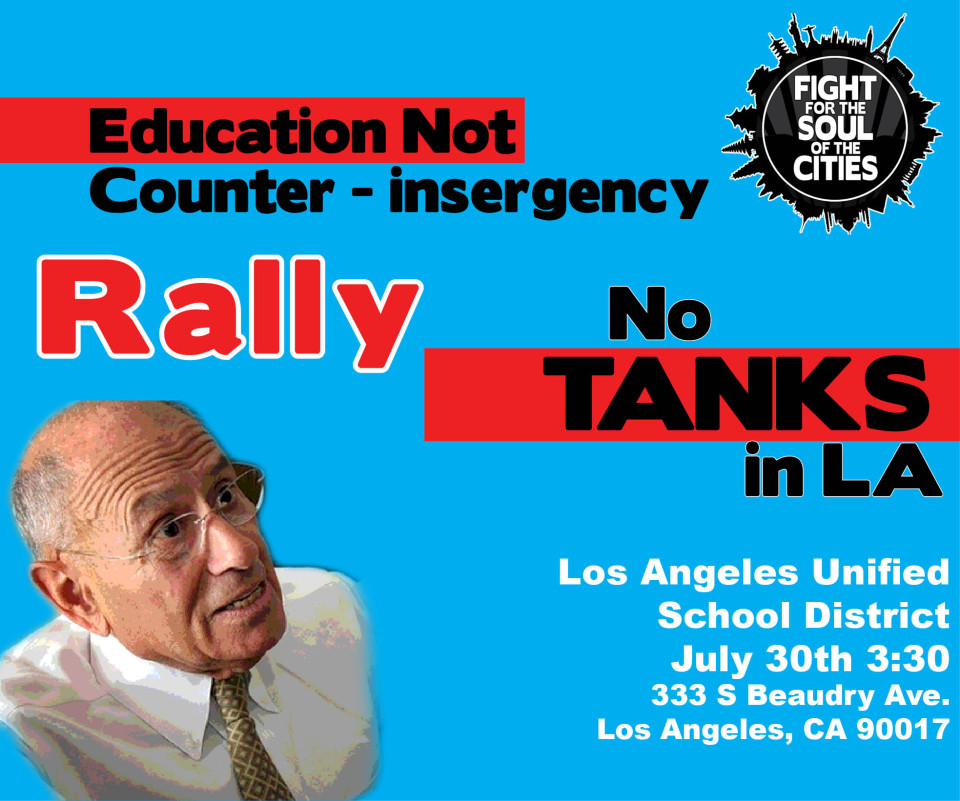 LAUSD and LASPD has proclaimed its discontinued relationship with the Federal Department of Defense 1033 Program, FFSC Rally and Demonstration Demanding LAUSD to Destroy/ Return All 1033 Weapons

On Thursday, July 30th  at the Los Angeles Unified School Board, the Labor/Community Strategy Center’s Fight for the Soul of the Cities Campaign members and leaders will rally and hold a demonstration calling on the Los Angeles Unified School District to end the militarization of our schools by ending their relationship with the Federal Department of Defense’s 1033 Program and destroy all equipment received through this program.

The Labor/Community Strategy Center’s Fight for the Souls of the Cities Campaign received a second copy of a letter dated June 19th from LAUSD Superintendent Ramon Cortines stating that the Los Angeles School Police Department has “discontinued” participation in the Department of Defense 1033 Program.  This program permits the transfer of surplus military weapons to local police agencies, including those police departments serving K-12 schools, since its inception in 1990 where over $5 billion of weapons have been transferred to date.  The use of military equipment in urban settings comes out of the reactionary traditions of “counterinsurgency” against people making demands on corporations and their government—policies that violate people’s human rights all over the world including the United States.  Last summer, it was revealed that LAUSD and its LASPD had received at least 61 assault rifles, 3 grenade launchers and 1 MRAP vehicle.

We recognize that this letter is a critical advance by the LAUSD and LASPD in ending its relationship to this racist program of counter-insurgency.  Yet, as a civil rights and human rights organization with deep ties to the 650,000 LAUSD students and many of their parents and teachers – we are obligated to get clear exactly what was done, when, what verification there is, and again what weapons does the LAUSD, if any, still have in its possession.

For the Strategy Center, a clear way we can measure if LAUSD and LASPD has ended its relationship with the 1033 program will mean: 1) an official letter of LAUSD to the DOD stating their intent to end their relationship to the program, 2) that LAUSD destroyed or returned the unaccounted 61 M-16 assault rifles, 3) a public statement on the LAUSD board decision to discontinue its relationship to the 1033 Program and its destruction or returned status of all DOD 1033 program acquisition including the M-16’s.  We hope LAUSD/LASPD will agree that these are important markers to move forward and that we are discussing the same outcomes, with the same set of facts and agreements.

Clearly, if Strategy Center can get verification on all this points, we believe LAUSD discontinuing its participation in the DOD 1033 Program will be an important breakthrough for the organizing we have engaged over the past year to demilitarize the LASPD.  LAUSD is the second largest school district in the country and the LASPD is the largest dedicated school police department in the country.  Our ultimate goal is to end the Department of Defense 1033 Program – our Fight for the Soul of the Cities No Tanks Campaign has been building a national campaign urging President Obama to end the program all together.  We are calling on Los Angeles Sheriff Department and Los Angeles Police Department’s to end their relationship and destroy all the equipment received from the 1033 program (LAPD has amassed over 1,600 M-16 assault rifles, a military truck, military cargo plane and helicopter; while the LA Sheriff has over 1,000 M-16 assault rifles, 2 MRAP tanks, and 62 mine detectors, all through the DOD 1033 program).

Fight for the Soul of the Cities wrote to the Superintendent on July 28, 2015, on the matters of substance, it is encouraging that “The Los Angeles School Police Department discontinued its participation in the DOD “1033 Program.” We have several questions:

The Strategy Center and our Community Rights Campaign and the Fight for the Soul of the Cities has organized hundreds of students reaching out to thousands of students asking LAUSD to do the right thing to end it relationship to the 1033 Program, which we believe was an important factor in the in the district’s statement to discontinue its participation to the 1033 program.  The district should’ve never had taken weapons from this program of counter-insurgency.  We have waged this struggle over the 1033 Program with the district for close to a year which included several letters to the board and federal government, thousands of petitions, very well covered community actions and forums, many public speakers at LAUSD Board of Education meetings, individual meetings with LAUSD Board members, let alone the actions and energy from the streets in Los Angeles, New York, Cleveland, St Louis, Baltimore where a real sentiment and demand’s to demilitarize police, to end programs like the 1033, that everyday mass criminalization and incarceration needs to end for Black and Brown people.  Honestly given the work we have all done – we think this should’ve been an easy decision, it shouldn’t have been a drawn out attrition of procedural decisions by LAUSD leadership.

For us, we have been clear that the school to jail track goes hand in hand to the mass outcry of police violence and mass criminalization of the Black community and the deportation and incarceration of Black, Latino and immigrants that is playing out in the community.  There is such a growing mood, finally, of deep anger and fight-back in the Black community in particular, an outrage about state violence that Black community has faced for centuries, there is a growing discussion that these policies are not just racist but truly genocidal–an attack on a whole people struggling for their very survival.