Google+ Why Are Police Using Military-Grade Weapons in High Schools? » Fight for the Soul of the Cities

Why Are Police Using Military-Grade Weapons in High Schools? 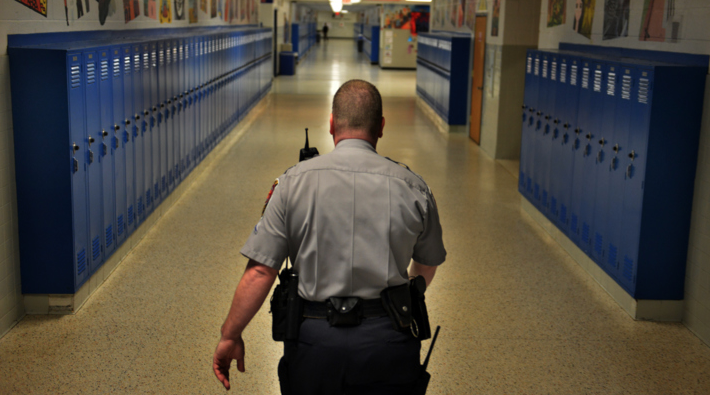 Michael Davis’ block in Los Angeles used to have huge trees on both sides of the street, so big they created a canopy. “They were beautiful,” says the 17-year-old high school senior. “They covered the whole top of the block.” But recently, he says, the trees were cut down. In their place, there are now bright lights and security cameras. Davis is a youth leader with the Community Rights Campaign and its student club Taking Action, which organize around the school-to-prison pipeline, mass incarceration, and the criminalization of black and brown communities in Los Angeles. Having the trees on his block replaced with cameras and lights was just one sign of what Davis describes as a nationwide trend of police militarization against communities of color.

One stark example of that militarization was the revelation last month that the Los Angeles Unified School District (LAUSD) and school districts around the country have been receiving military-grade weapons through the federal Department of Defense’s 1033 program. The program, which authorizes the transfer of excess Defense materials to federal, state and local agencies for law enforcement purposes, gained notoriety after protests in Ferguson, Missouri were met with a hyper-militarized response by the police. Compiling data from the Defense Logistics Agency (DLA) and a number of media reports, the NAACP Legal Defense Fund and Texas Appleseed paint a disturbing picture of the program’s reach into K-12 schools: At least five school districts in Texas have been outfitted with materials through the program, including one with a SWAT team; at least five districts in California, with both San Diego and Los Angeles receiving Mine-Resistant Ambush Protected (MRAP) vehicles; as well as a number of other states including Utah, Georgia, Florida, Kansas, Michigan and Nevada that received materials ranging from blankets and laptops to assault rifles.