We strongly rejected the District’s participation in the Department of Defense 1033 Program; it was and continues to be a form of educational and military racism to participate in this counter-insurgency program.
3
Mar 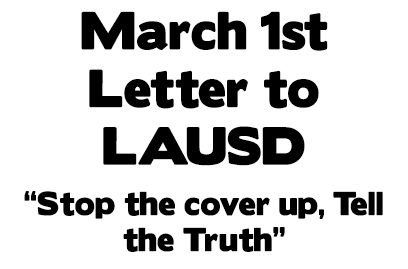 We strongly rejected the District’s participation in the Department of Defense 1033 Program; it was and continues to be a form of educational and military racism to participate in this counter-insurgency program. While it’s an important milestone that you have reportedly returned all the weapons received through this program including the last of the M-16 assault rifles; it’s unacceptable that there has not been a true factual account of your decision to participate in said program, no attempt to meet our demand to give us a full inventory of LASPD weapons, no public apology, no attempt to repair your harm on the school community, and no real resolve to reject this program all together given that it will impact Black and Latino students and their families. With the growing movement by Black and Latino communities, responding to systematic police criminalization, abuse and violence, and the numerous raids in immigrant communities by ICE and coordinated with local police departments—we understand that 1033 is a counter-insurgency program meant to suppress marginalized communities and repress movements and protesters as we witnessed in Ferguson, MO and Baltimore, MD.

The Labor/Community Strategy Center’s Fight for the Soul of the Cities demands and calls on LAUSD to immediately:

As an institution of learning, LAUSD must lead the nation in rejecting the militarization of the police and the human rights violations against Black and Latino people in LA and nationally.

Letter to President Zimmer on 1033 for Public Apology Reparation Resolution